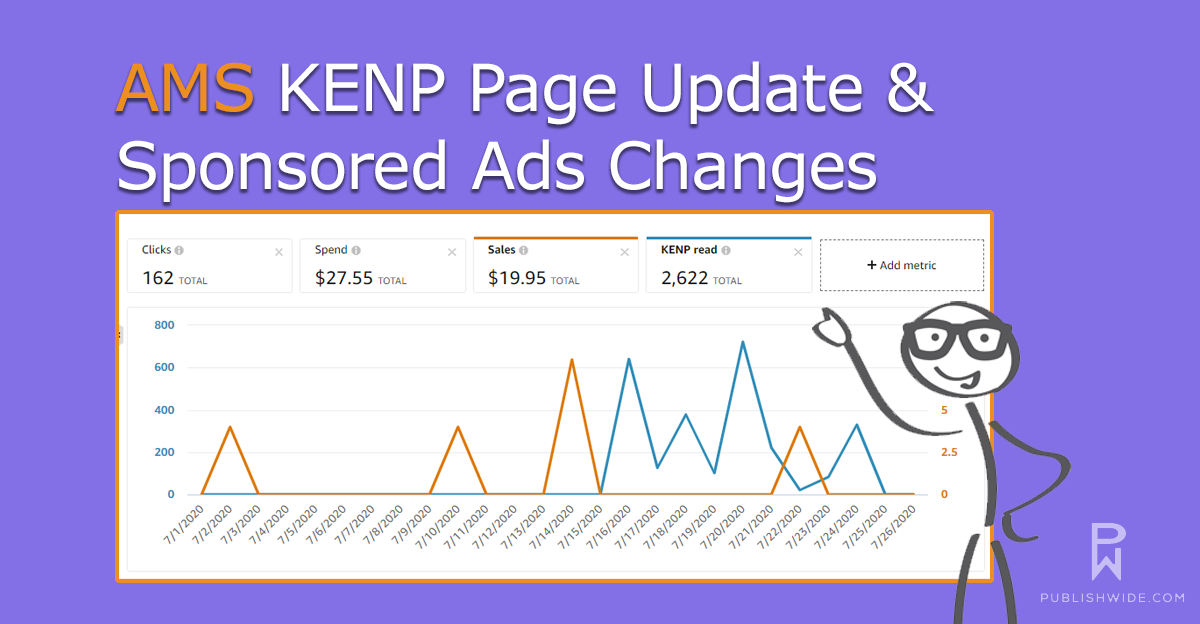 You should know that AMS has finally been updated to improve the user experience for KDP authors! The two main changes are:

In this post, we will be going over both changes. More importantly, we’ll explain what they mean for you. We’ll also cover some of the most commonly asked questions about these changes have been.

Kindle Edition Normalized Pages (KENP) Read will now be shown on the AMS dashboard. Users will finally be able to track how many pages have been read as a result of their ads.

What does the inclusion of KENP reads on AMS mean for you?

Before this change, AMS ads showed no data about your KU pages. Users had to either guess the number of KENP read or ignore any impact from AMS ads on KENP altogether.

Showing the KENP Read data data helps publishers get a better idea for how effective their ad campaigns are. But AMS does not estimate your KENP royalties. 150 KENP read means nothing if you don’t know how much money it has earned.

Your Sponsored Product AMS campaigns will now only report data for their advertised ASIN.

Different formats of a single book have a separate ASIN for each format, but they can share a single product page.

Previously, AMS sponsored ads campaign reports lumped all of these different formats together–even if the ad wasn’t advertising for those other ASIN.

By removing the metrics generated from the other, non-advertised formats from your Sponsored Product ads, your campaign reports are more aligned with the exact product that you’re actually advertising.

What does this mean for you?

This change means metrics like ACOS, ROAS, and Conversion Rates will be more accurate, but may look like they’re doing more poorly than before–especially if your ads get non-advertised sales.

Below is an example scenario of how the exclusion of non-advertised ASIN in your reports will change your metrics:

Here is how your metrics would differ pre and post update:

The upside of excluding non-advertised ASIN in campaign reports is that it’s a more accurate report for your advertised product.

But the downside is that if you get a paperback sale from an ebook campaign, it won’t be attributed to your campaign even though the sale took place as a result of your campaign.

With changes as drastic as these, there are some notable confusions that some users have. Here are some of the most commonly asked questions and their answers:

Why can’t I see KENP data before July 15th on AMS?

Amazon has said that KENP read data will be tracked starting on July 15th, 2020 in their notice email about the inclusion of KENP read on AMS.

How many days will it be before my KENP data is finalized on AMS?

Your KENP data on AMS is finalized on the day that it takes place. Amazon will track the KENP read for up to 14 days after someone clicks the ad.

What does it mean that Amazon tracks for up to 14 days after someone clicks the ad?

After a user clicks on an AMS ad, Amazon tracks that user’s behavior for up to 14 days. If the user were to purchase the advertised book in those 14 days, the day the purchase is made will be when the order is recorded. This same holds true for KENP read data as well.

Will AMS estimate my KENP royalty?

As of November 18, 2020, AMS started estimating KENP royalty, where previously it had only tracked the KENP read. Providing this metric to users will go a long way in making the dashboard more useful.

(P.S. Publishwide has been integrating this data for months before Amazon! Join here)

Will the AMS KENP changes affect my ACOS?

No, your KENP reads will not affect your ACOS because ACOS is dependent on sales.

Are there delays for the KENP data?

No, KENP read is attributed to the day that the pages were read.

The only exception are Kindles that accumulate page-reads while they are offline. In those cases, Amazon will update the data when the offline Kindle comes online.

Hi Neo, I noticed that too! It was something that I saw when I was going through the AMS code a few weeks ago. It was always felt odd that Amazon didn’t include that data when they first introduced the AMS KENP read metric, since they were already doing it to the beta KDP report. Better late than never, though!